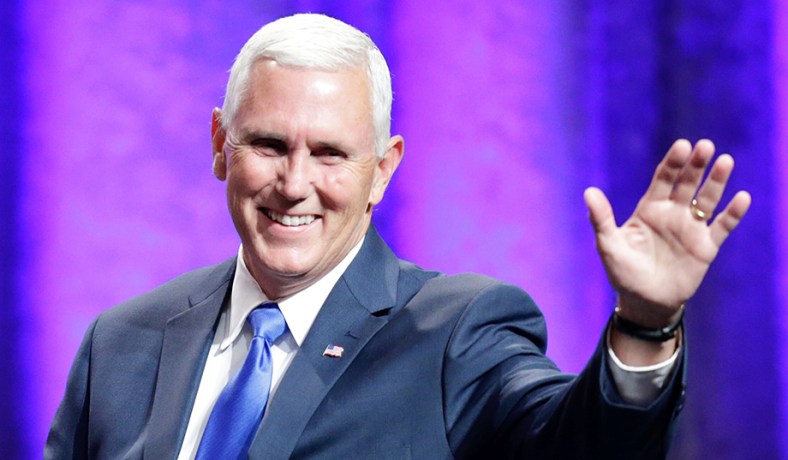 During a recent speech at Ripon College in Wisconsin, Vice President Mike Pence went on the offensive against Democratic candidate Joe Biden. Addressing a group of Wisconsin voters, Pence pointed to Biden’s extreme views on abortion, claiming the presidential hopeful supports it throughout all nine months of pregnancy. Though Biden has attempted to frame himself as a moderate on the issue, his views on abortion are in direct opposition to the opinions of a majority of Americans.

“Joe Biden supports taxpayer funding of abortion, repealing the Hyde Amendment, ending a Mexico City policy that prevents federal funding from supporting abortions around the world,” Pence said. “And Joe Biden even supports late-term abortion — allowing innocent, unborn children to be aborted right up to the moment of birth.”

President Donald Trump made similar remarks at the March for Life this year. Making history by being the first President to attend the event in person, Trump affirmed that the pro-life movement is “…fighting for those who have no voice.” Pointing to the radical abortion legislation in New York and Virginia, Trump stated that the Democrats’ extreme views “would allow a baby to be ripped from the mother’s womb right up until delivery.”

Opponents of the current administration have argued that “abortion up until the moment of birth” is merely a “boogeyman” that pro-lifers created to “frighten voters” and “derail conversations about constitutional rights.”

But Trump, and more recently, Pence, have exposed the horrifying permissiveness behind America’s abortion laws. Something that Biden has pledged he will “codify.” The skeptical reaction to claims about late-term abortion likely stems from disbelief that the Supreme Court would allow the destruction of viable infants.

Surely it cannot be true that our country permits the destruction of healthy babies, and what physician would even agree to do such a thing?

There is a common misunderstanding about what Roe v. Wade did to abortion laws in the United States. Pro-choice activists and the media have wrongly insisted that Roe only legalized abortion during the first trimester of pregnancy. In reality, the case neglected to establish any protections for the unborn throughout the first and second trimesters. Any attempt to regulate third-trimester abortions so long as the mother’s health was not endangered was negated by Doe v. Bolton.

“Doe’s broad definition of ‘health’ spelled the doom of statutes designed to prevent the abortion late in pregnancy of children capable of surviving outside the mother’s body unless the mother’s health was in danger. By defining health as “well-being,” Doe established a regime of abortion-on-demand for the entire nine months of pregnancy, something that American public opinion has never approved in any state, let alone nationally.”

The “medical necessity” of late-term abortions is left to the discretion of the abortionist. Multiple abortion providers have admitted that a woman not wanting to be pregnant anymore is a medical reason for abortion. What the Court did in their 1973 ruling was to enable anyone who profits from abortion to subjectively determine the health rationale behind the procedure.

In other words, so long as an abortionist agrees to do it, a woman can have an abortion at any time and for any reason in this country.

“I don’t want to be pregnant” is the reason at the end of the day. It’s a medical indication. See: maternal physiology.

Biden expressing unequivocal support for abortion rights may not seem like a radical stance for a Democrat. However, his promise to endorse legislation that would enshrine abortion “rights” into federal law would remove any power from the states to enact any restrictions. This would not only prohibit any pro-life laws from being passed, but it would give the government the ability to enact measures a majority of Americans oppose.

Pence was entirely correct when he warned voters about what is at stake here if Biden wins the election. Most voters are not in favor of repealing the Hyde Amendment or the Mexico City Policy. Despite what most of the Democratic Party is currently pushing for, not many Americans like the idea of federal funding going toward abortion.

Even half of Americans who identify as pro-choice do not think abortion should be supported by taxpayer dollars.

Poll numbers show that most people agree with pro-life values more than the public portrayal of the abortion debate would have one think. Most people would like to see it severely restricted or banned altogether. For many Americans, the idea of taxpayers footing the bill for unlimited abortion on demand is far too much.

If anything, the content of Pence’s speech demonstrated how Biden and the rest of the Democratic Party have become so blinded by their pro-choice agenda, they have rendered themselves out of touch with the American people.