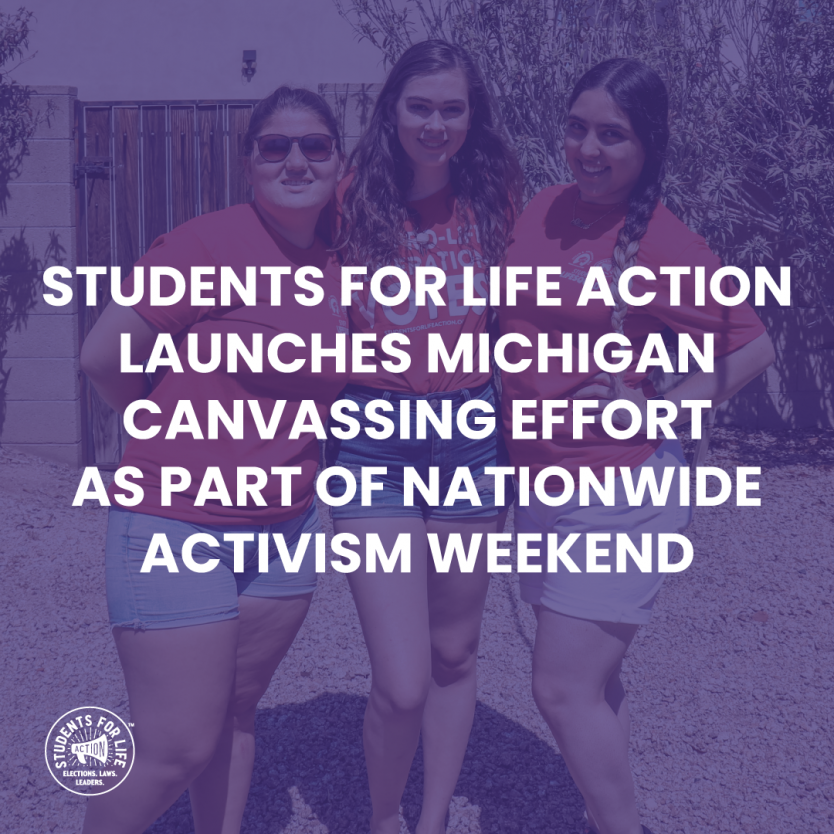 FREDERICKSBURG, VA AND LANSING, MI (9-24-2020) – Students for Life Action (SFLAction) announced on Thursday that they would be sending students into Michigan, among other states, to educate voters on the pro-life records of federal, state, and local candidates for office. The activism weekend will occur from Thursday, Sept. 24 to Sunday, Sept. 27 and will include other states Montana, North Carolina, Pennsylvania, Florida, Texas, Arizona, and Minnesota. With a Supreme Court vacancy in play, the importance of strong pro-life leaders in the White House, Senate and House has never been clearer. SFLAction is placing the protection of pro-life legislative majorities and the urgent need to maintain both a pro-life White House and majority in the Senate at the highest priority in the coming weekend.

The Planned Parenthood Action Fund has predicted that Michigan law will severely restrict legal abortion in the state if Roe v. Wade is overturned, according to their website.

“Maintaining the pro-life majority in the Michigan state legislature, coupled with the nomination of a justice who will defend life in law to the U.S. Supreme Court, puts Students for Life’s vision of abolishing abortion within reach for the first time since the Roe decision was handed down by seven men in 1973,” remarked Kristan Hawkins, SFLAction President.

In Michigan, SFLAction canvassing efforts will educate voters on the pro-life records of Rep. Tim Walberg and Gina Johnson, both candidates for the Michigan State Senate.

“It is absolutely critical that we maintain a pro-life stronghold in Michigan,” said Mary Kate Knorr, SFLAction Strategic Partnerships Director. “Students from across the region are concerned with outcomes in Michigan, which is why we’ve been able to mobilize so many to travel there to canvas.”

Hawkins recently penned an op-ed in USA Today on the urgent need to consider Sen. Kamala Harris’ pro-abortion, anti-faith policies, which you can read here: https://www.usatoday.com/story/opinion/voices/2020/09/22/catholic-abortion-vote-biden-trump-ruth-bader-ginsburg-2020-column/5853831002/