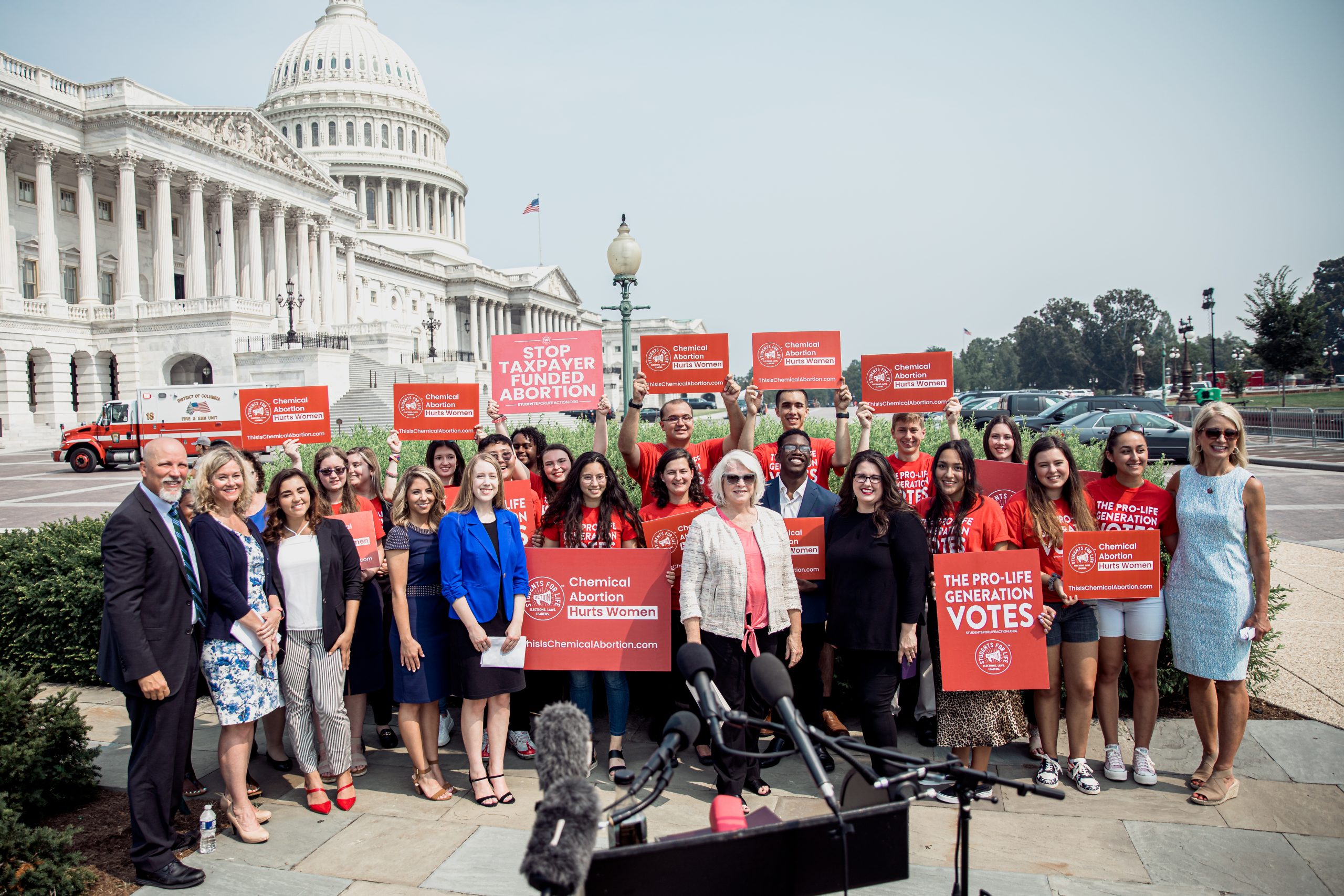 “Schools should not be in the business of ending the lives of future students,” said SFLAction’s Kristan Hawkins.

WASHINGTON, D.C. – Students for Life Action President Kristan Hawkins along with Rep. Chip Roy, Sen. Steve Daines and a number of pro-life leaders announced support for the soon to be introduced Protecting Life on College Campus Act 2021, a measure designed to prevent Corporate Abortion from misusing colleges and universities as a place to market and sell Chemical Abortion Pills. The bill would deny federal funds to schools that push Chemical Abortion drugs through a “student-based service site.” The issue is timely as California will require student health centers to provide Chemical Abortion Pills by 2023, an effort that the bill sponsor pushed as a beta test for other states. Already state legislators in New York and Massachusetts have legislation at play to follow suit.

Hawkins, whose organization has groups on more than 1,250 campuses in all 50 states, said, “The Protecting Life on College Campus Act 2021 is just what we need to prevent college and universities campuses from being conscripted into business with Corporate Abortion.”

She observed, “We found that the schools in California were not excited to take on this liability – the risk of death, injury and infertility that can result from the pills, and the lawsuit potential they would create. We raised concerns about health risks for fellow students and university staff from blood and tissue in the dorms. We noted that Corporate Abortion has located abortion vendors close to college campuses across the state.

“In fact, pro-choice Gov. Jerry Brown used one of our talking points when he vetoed the second attempt to force all California colleges and universities to provide life-ending drugs on campuses, noting, “(b)ecause the services required … are widely available off-campus, this bill is not necessary. We discussed the horrors of painful episodes of bleeding that can lead even to the deaths of women, now callously sent back to the dorms if the abortion lobby gets its way, abandoning young women to life and death tragedy between classes. That’s no way to prepare students for hope and a future.”

Because of the expansion of Chemical Abortion Pills – now at least 40 percent of all abortions – SFLAction engaged with state legislatures in dozens of states this spring to stop distribution, including on-line, death by mail, working in 14 states and counting.

In advance of the event, Students for Life Action Media and Policy Strategist Kristi Hamrick had an opinion piece at Newsweek asking, “Why Do Some Pills Have a Get-Out-Of-Regulation-Free Card?” discussing the deadly pills. She observed: “On the same day the FDA announced it would pull a COVID-19 vaccine from the market because six people experienced blood clots and one died after taking it, we learned that chemical abortion pills were to be deregulated, despite the fact that more than 20 women have died taking them and thousands more have experienced adverse side effects.”

To learn more on how abortion kills both infants and their mothers’ health, fertility, and lives, click here, or visit ThisIsChemicalAbortion.com.

Students for Life Action (SFLAction), a 501c4, along with its sister organization, Students for Life of America (SFLA), a 501c3, make up the nation’s largest, pro-life, youth organization as well as operating a political and policy operation engaging people of all ages. Together they work to end abortion, the human rights issue of our day, and provide political, legal, and community support for women and their children, born and preborn. Headquartered in Fredericksburg, VA, SFLA has more than 1,250 groups on middle, high school, college, university, medical and law school campuses in all 50 states. SFLA creates strategy, policy and programming that connects those most targeted for abortion with people ready to help and builds a framework for political engagement on their behalf. SFLA/SFLAction has more conversations with those most targeted by the abortion industry every day, week, and year than any other pro-life outreach in the world. Every week, Students for Life entities reach more than 2 million people across social media platforms to have nearly 200,000 digital conversations. Under the leadership of SFLA/SFLAction President Kristan Hawkins, who was recruited to build the organization, SFLA has grown over the last 15 years into a $15 million organization preparing for a Post-Roe America.