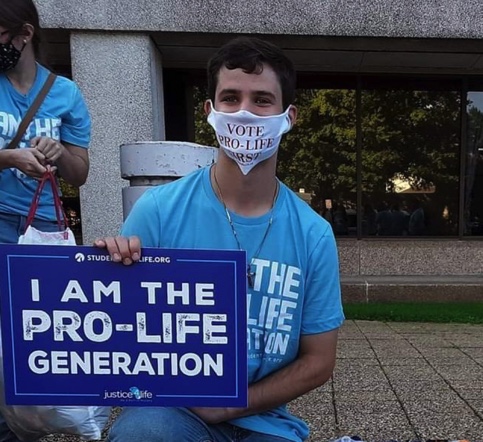 On February 3rd, 2021, I was asked by the Southeast Regional Coordinator Brooke Larkin to testify before the South Carolina Judiciary Constitutional Laws Subcommittee in favor of S.1, or the South Carolina Fetal Heartbeat and Protection from Abortion Act. This bill requires doctors to perform an ultrasound to detect a heartbeat before an abortion procedure can be performed.

I arrived at the South Carolina State Capitol Building shortly before the time to testify. I went to the Senate Chambers and was informed that the hearing was taking place in the House of Representatives. I went to the House Chambers and was informed that the hearing was taking place in the Solomon Blatt Building. Mallory Finch, another student leader apart of Students for Life Action, came listen and support the bill along with Brooke. They helped me revise my speech before testifying later that afternoon. I had never done anything like this before and was terrified. When we arrived at the Blatt Building for the hearing, we met several people waiting to testify for the bill. We entered a room where we waited to give our speeches and were joined by Lieutenant Governor Pamela Evette, who showed her support for the bill. I was one of the last people to give their speech in person before turning to online speeches. During my speech, some women laughed at the statistics of what damage abortion does to a woman if abortions are successful and unsuccessful, according to medical standards.

At the end of each speech, Representatives on the committee were given time to ask questions or make comments. I was honored that Rep. Justin Bamberg (D), a pro-choice member of the subcommittee, told me, “I am on the other side of this issue as you and I wanted to say that you did a very good job presenting in front of the committee. I could not stand up and testify in front of a committee at 19. So I just wanted to make sure that I let you know that you did a great job.” I was taken aback by Rep. Bamberg’s comment on my speech. I also was honored to have Rep. Russel Fry (R) tell me, “Collin, I also echo that and I am on your side of this issue but I appreciate you and so many other young folks coming to speak on this bill today. We are the Pro-Life Generation and I think that’s a remarkable thing for you to do, to testify before us today!” It was amazing to have 2 Representatives on two opposing sides, tell me that I did a great job and thanked me for testifying.

15 days later, on February 18th, 2021, S.1 was passed by the South Carolina House of Representatives, with a vote of 74 to 39! This bill was then signed into law later that same day by Governor Henry McMaster. I am excited to have been apart of the history of my state and now law that almost destroys the thought of abortion in South Carolina. We are not there yet but we are making strides in that direction.

I want to first and foremost thank God for the opportunity to be apart of Students for Life and Students for Life Action, to each coordinator and staff member who has mentored me and supported me through my pro-life activist journey, my family, my church, and my girlfriend Chloe for standing by me and encouraging me and staying up late to encourage me while I was away on deployments and for helping me prepare my speech.