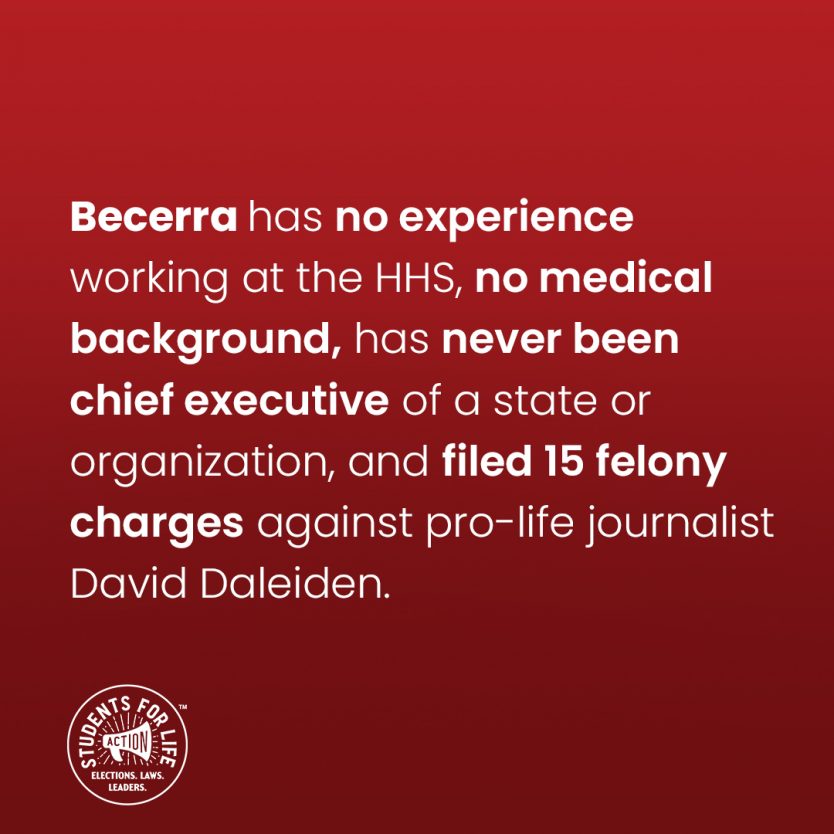 Discussed during a nationwide webcast, SFLAction will call on the U.S. Senate to VOTE NO on Xavier Becerra for HHS Secretary with a focus on 10 Specific Senators including Maggie Hassan in New Hampshire, Joe Manchin in West Virginia, Raphael Warnock in Georgia, Susan Collins in Maine, Mitt Romney in Utah, Lisa Murkowski in Alaska, Bob Casey in Pennsylvania, Michael Bennett in Colorado, Jon Tester in Montana, and Kyrsten Sinema in Arizona.

“The common thread of Xavier Becerra’s tenure as the attorney general of California is that he abuses the law to target his enemies,” said Sen. Tom Cotton on the SFLAction nationwide event featuring Cotton, Sen. Steve Daines & SBA List President Marjorie Dannenfelser.

WASHINGTON D.C. (02-19-2021) – Students for Life Action President Kristan Hawkins followed up on her nationwide webcast in which she and her special guests urged a NO vote on California Attorney General Xavier Becerra to head Health and Human Services as President Joe Biden’s pick for Secretary by announcing a new targeted campaign for a NO VOTE on Becerra.  In a paid and earned media campaign, SFLAction will be urging that 10 Senators in particular receive daily calls, and they are: Senators Maggie Hassan in New Hampshire, Joe Manchin in West Virginia, Raphael Warnock in Georgia, Susan Collins in Maine, Mitt Romney in Utah, Lisa Murkowski in Alaska, Bob Casey in Pennsylvania, Michael Bennett in Colorado, Jon Tester in Montana, and Kyrsten Sinema in Arizona.Becerra is expected to go before two Senate committees next week for hearings before heading to the full Senate. SFLAction spearheaded a letter signed by more than 40 powerhouse pro-life and pro-family organizations to the full Senate early in the nomination process, detailing Becerra’s long track record of abusing his authority, which Hawkins discussed on the broadcast this week, asking her guests why Becerra was the wrong pick at HHS.

Cotton observed, “It doesn’t matter whether he is suing nuns who object to purchasing contraceptive coverage or suing pro-life journalists who expose some of Planned Parenthood’s gruesome misdeeds or blocking mergers of hospitals on arbitrary grounds or infringing on the free speech rights of pro-life activists.  The common thread of Xavier Becerra’s tenure as the attorney general of California is that he abuses the law to target his enemies, which curiously enough always seem to be people of faith, and pro-lifers and other social conservatives. If he’s done it with the power he has as attorney general of California, of course he will do it with the vastly greater power he would have as the secretary of Health and Human Services.”

Daines agreed and observed: “In Washington D.C. there is an old adage that people equals policy. So, when Joe Biden, President Biden, nominates somebody like Xavier Becerra that tells you exactly where Joe Biden’s center of gravity is on this issue of abortion and protecting the most vulnerable in our society.”

“(A) number one priority of the abortion industry is to move from the doctor’s office from clinics and move on-line and through the mail to have the more widespread use of the drug that can have the very dangerous side effects to a woman’s health, to say nothing to the terrible main effect it has of ending the life of an unborn child. Just another reason to oppose Xavier Becerra’s nomination. Another reason for all of you to go to StopBecerra.com so you can contact your Senators and ask them to oppose this nomination,” Cotton said.

This SFLAction effort follows our nationwide petition calling on the U.S.  Senate to VOTE NO on Becerra to head HHS, in part because of his aggressive legal action to get rid of FDA health and safety standards protecting women from dangerous and deadly Chemical Abortion Pills.

SFLAction is engaged in on-going opposition to this pick to head the nation’s healthcare system. Learn more at Students for Life Action.

Students for Life of America (SFLA) is the nation’s largest, pro-life, youth organization. Headquartered in Fredericksburg, VA, SFLA serves more than 1,240 groups on college and university, middle and high school, medical and law school campuses in all 50 states. Student pro-life organizations work to confront policies on their campuses to support pregnant and parenting students, to end Planned Parenthood’s relationships with schools and communities, and to change minds of their peers about abortion. SFLA has more conversations with those most targeted by the abortion industry every day, week, and year than any other pro-life organization