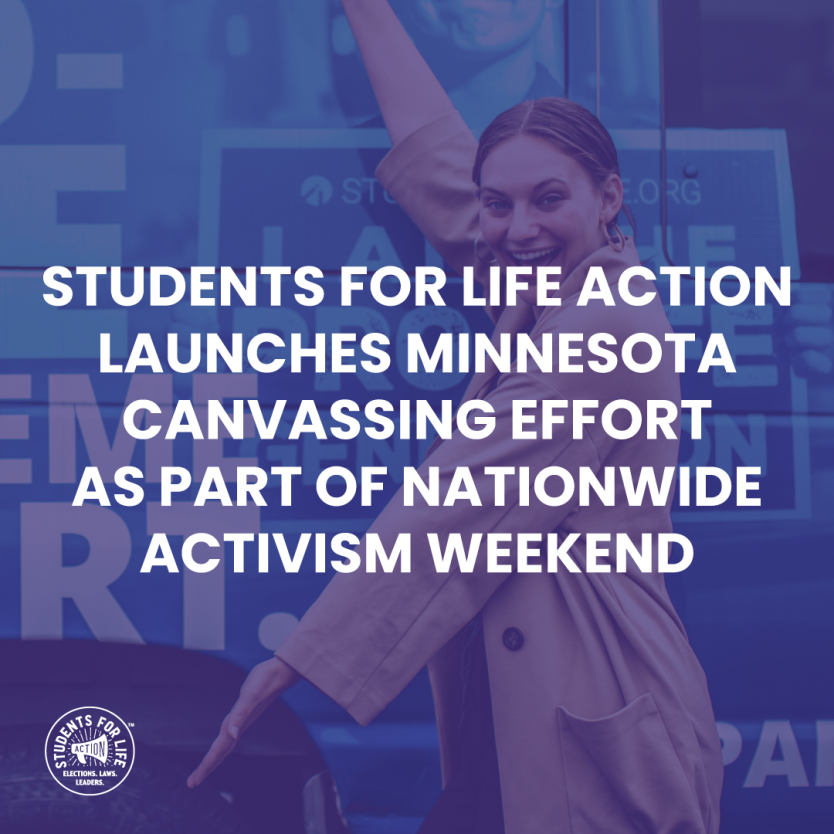 FREDERICKSBURG, VA AND ST. PAUL, MN (9-24-2020) – Students for Life Action (SFLAction) announced on Thursday that they would be sending students into Minnesota, among other states, to educate voters on the pro-life records of federal, state, and local candidates for office. The activism weekend will occur from Thursday, Sept. 24 to Sunday, Sept. 27 and will include other states Pennsylvania, North Carolina, Michigan, Arizona, Texas, Florida, and Montana. With a Supreme Court vacancy in play, the importance of strong pro-life leaders in the White House, Senate, and House has never been clearer. SFLAction is placing the protection of pro-life legislative majorities and the urgent need to maintain both a pro-life White House and majority in the Senate at highest priority in the coming weekend.

The Minnesota State Senate holds a pro-life majority, which must be defended this cycle.

“Maintaining the pro-life majority in the Minnesota State Senate, coupled with the nomination of a Justice who will defend life in law to the U.S. Supreme Court, brings Students for Life’s vision of abolishing abortion closer than it has ever been since the Roe decision was handed down by seven men in 1973,” remarked Kristan Hawkins, SFLAction President.

In Minnesota, SFLAction canvassing efforts will aim to make voters aware of the pro-life records of Congressman Greg Gianforte, who is running for governor, and Senator Steve Daines, who is opposed by incumbent pro-abortion Governor Steve Bullock.

“It is absolutely critical that we maintain a pro-life stronghold in Minnesota,” said Mary Kate Knorr, SFLAction Strategic Partnerships Director. “Students from across the region are concerned with outcomes in Minnesota, which is why we’ve been able to mobilize so many to travel there to canvas.”