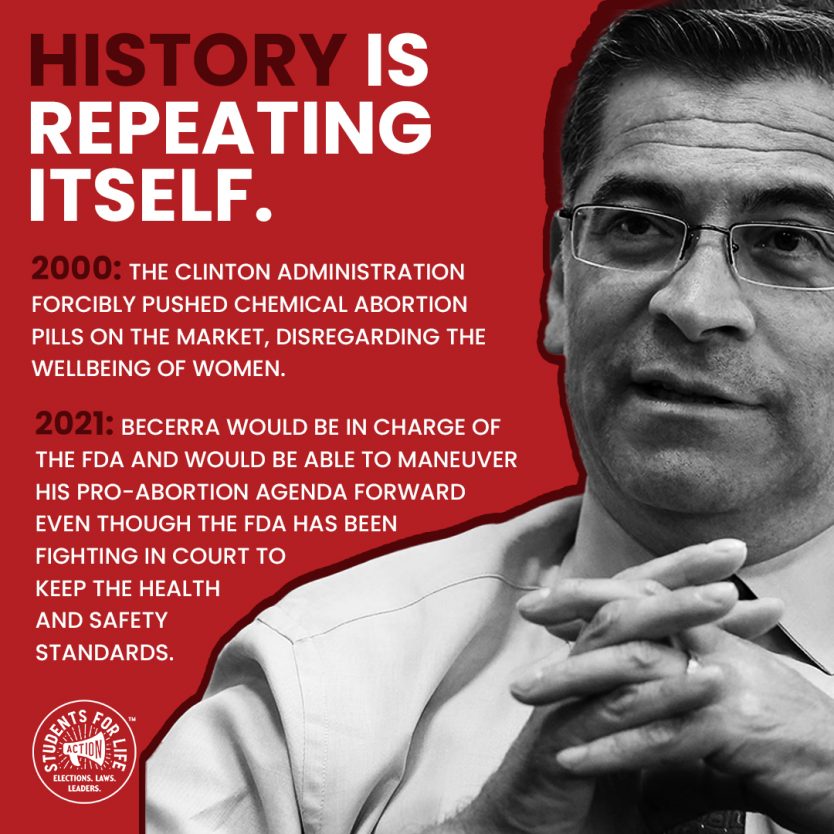 “If You Can’t name ANY limits for Abortion, You’re too radical to run the Nation’s Healthcare,” says Students for Life Action President Kristan Hawkins

“During two days of hearings, Xavier Becerra has talked a lot about finding common cause with pro-life Americans, but his history indicates that given the opportunity, he chooses to support the most extreme elements of the abortion lobby,” said Hawkins. “It’s more important than ever for Americans to visit StopBecerra.com and ask their Senators to vote NO on Becerra.”

WASHINGTON, D.C. (02-24-2021) – Students for Life Action President Kristan Hawkins said that after two days of hearings, California Attorney General Xavier Becerra’s answers to question from U.S. Senators raised the level of concern pro-life Americans have about what he would do with the power of Health and Human Services should he become secretary.

“Today, when questioned by Senator Steve Daines, Xavier Becerra would not name any limit on abortion that he would support, including sex selection abortions,” Hawkins noted. “When talking with Sen. Chuck Grassley he would not address whether babies aborted late in pregnancy should receive pain relief in abortion when you consider that babies receive anesthesia when having pre-birth surgeries. Becerra did not have much to say about Sen. John Thume’s concerns that Becerra might use his office to continue suing pro-life people. And yesterday, when questioned by Sen. Mitt Romney, Becerra would not explain his support for partial birth abortions, a late-term abortion procedure in which the baby is delivered all but for the head, and then killed right before delivery.

“While Becerra kept repeating his talking points about finding common ground, he didn’t look for it when he had power in other offices. As Students for Life’s recent poll notes, more than 7 out of 10 Millennials and Gen Z support limits on abortion. If Becerra doesn’t support any, he is too out of step to be in serving in public office. Students for Life Action and the Pro-Life Generation will continue to call for a NO vote on Becerra,” said Hawkins.

At USA Today, Hawkins noted the following on Becerra’s treatment of Americans:

Xavier Becerra, Biden’s pick for head of HHS, is in trouble for good reason

The former California attorney general has been rebuked by the Supreme Court and he’s simply unqualified to run healthcare in a pandemic.

Xavier Becerra is under fire as President Joe Biden’s first choice to head the Department of Health and Human Services for many reasons, from his litigious opposition to former President Trump’s administration in filing more than 100 lawsuits, to his advocacy for “Medicare for All,” to his championing a convicted drug dealer for a pardon. But on the issue of abortion, Becerra has a decades’ old track record of siding with the abortion lobby whenever possible and using the power of his office to try and force others to share his enthusiastic support of abortion up until the moment of birth.